Gov. J.B. Pritzker, alongside other lawmakers and stakeholders, announces a major step forward to legalize cannabis, at Black United Fund of Illinois on Saturday May 4, 2019. The bill also looks to expunge thousands of Class 4 felony marijuana convictions. (Abel Uribe/Chicago Tribune)

proposed law to legalize recreational use of marijuana in Illinois would allow possession of up to 30 grams of the plant for residents 21 and over, a $20 million low-interest loan program to promote “social equity” in business ownership, and expungement of misdemeanor and Class 4 felony marijuana convictions.

At the heart of the measure is ensuring that communities that have been disproportionately affected by enforcement of lower-level drug crimes would be able to benefit from the legal pot business in Illinois, said Gov. J.B. Pritzker and lawmakers who worked on the measure at an announcement Saturday morning.

“Illinois is going to have the most equity-centric law in the nation,” Pritzker said at the Black United Fund of Illinois on Chicago’s South Side.

The governor and lawmakers touted a central social justice provision of their proposal: Expunging what they estimate would be 800,000 low-level drug convictions. Revenue from Illinois’ marijuana industry would be reinvested in communities that lawmakers said have been “devastated” by the nation’s war on drugs.

Majoring in marijuana: Colleges ramp up training for weed industry jobs as demand for pot grows »

Under the proposed rules, no new large-scale commercial growers would be permitted to set up shop here, at least for now. Instead, the focus would be on small “craft” growers, with an emphasis on helping people of color become entrepreneurs in the weed industry. In addition, adults would be allowed to grow up to five plants per household, in a locked room out of public view, with the permission of the landowner.

“We have to ensure it’s not a small group of people getting very rich,” said Rep. Kelly Cassidy, D-Chicago, one of the measure’s sponsors. “We want to make a lot of new business leaders in the state through this process.”

Municipalities could ban retail stores within their boundaries within the first year of the program. After that, any ban would have to come through a voter referendum. 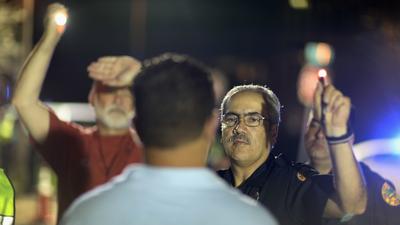 According to a summary from Pritzker’s office, permit fees would be $100,000 for growers and $30,000 for retailers, with lower fees for applicants from minority areas disproportionately affected by convictions in the war on drugs. There would also be a business development fee of 5 percent of total sales or $500,000, whichever is less, for cultivators, and up to $200,000 for dispensaries, with lower fees for “social equity applicants.”

Cultivators and processors would pay 7 percent of gross sales to dispensaries, while consumers would pay a 10 percent sales tax on products with less than 35 percent THC, the component that gets users high; 20 percent for all cannabis-infused products, such as edibles; and 25 percent sales tax on products with more than 35 percent THC, such as for concentrated extracts known as shatter and wax.

Opponents of legal marijuana in Illinois: 'This is not a done deal' »

Of the tax revenue generated, 35 percent will go to the state General Fund, 25 percent for community reinvestment, 20 percent for mental health and substance abuse treatment, 10 percent for the state’s unpaid bills, 8 percent for law enforcement training grants, and 2 percent for public drug education.

Those who treat substance abuse warned of an increase in addiction if marijuana use is made legal.

Aaron Weiner, director of addiction services at Linden Oaks Behavioral Health in Naperville, emphasized his concerns about the lack of limits on THC concentration, that advertising will be allowed, that marijuana shops can be 1,000 feet from schools, and that concentrates and extracts can be sold.

“This is a bill to generate money for the marijuana industry,” he said. “We have other, more responsible options for drug policy — our state deserves better.” 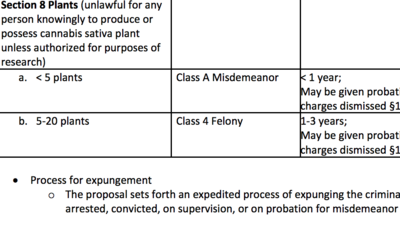 A group that opposes legalization said the bill would usher in an “addiction-for-profit industry” that it said will have “devastating impacts on citizens.” Smart Approaches to Marijuana supports efforts to slow down on legalization.

“Marijuana is not inevitable,” Kevin Sabet, the president and founder of SAM, said in a written statement.

Proponents on Saturday said that what makes the bill stand out is people of color were at the center of the measure’s negotiations, where they hadn’t been before.

The governor would appoint a cannabis regulation oversight officer who would recommend changes to the law and rules, and would coordinate regulation among the departments of agriculture, revenue, financial and professional regulation, state police, public health, commerce and economic opportunity, and human services.

Advertising would be prohibited near schools, playgrounds, public transit and public property, and any advertising meant to appeal to minors would be banned, lawmakers said.

Packaging would be sealed and labeled, child-resistant, and required to state that cannabis “can impair cognition and may be habit forming,” and should not be used by pregnant or breast-feeding women. It would be illegal to resell marijuana, and to take it out of state, since it remains illegal under federal law.

Hutchinson spoke directly to those opposed to legalizing the recreational use of marijuana in the state, specifically those who advocate for slowing down the process. The legalization bill she and other lawmakers have led the charge on not only addresses the logistics of the weed business here, but does so under the umbrella of social justice reform.

“Every month that goes by, there are some who can’t get a lease, can’t get a loan, and can’t get a job” because of low-level marijuana convictions, she said. “Every sentence is a life sentence.”

As they spoke, leaders were surrounded by advocates from civil rights groups and anti-violence workers. Minor criminal convictions related to drugs are directly tied to violence, they said, and legalizing marijuana could make a difference.

“When you are marked, you can’t get a job,” said Rodney “Hot Rod” Phillips, an anti-violence outreach worker in Englewood for Communities Partnering 4 Peace. “That leads to despair.”

The state’s current medical marijuana program would remain the same, lawmakers said, and dispensaries would be required to make sure enough supply is set aside for medical use.