HOW FAR HAS TECHNOLOGY COME SINCE THE LAST ‘SMART BORDER’ FAI LED?

Whether existing surveillance technologies are advanced enough to create a “smart border” remains an open question, even though a spending bill recently presented to President Donald Trump allocates $100 million for its construction. The smart border is an updated version of an old idea: a virtual fence of cameras and sensors along the line between the United States and Mexico. As soon as the suggestion gained traction, activists quickly, and rightly, pointed out that the idea violates the civil liberties of people near the border by essentially keeping them under constant surveillance. But another question is important, too: is this technology even advanced enough to work, or is it all just vaporware?'

It’s a surprisingly difficult question to answer, given that Customs and Border Protection itself doesn’t have good metrics for what “works” or not. A March 2018 report from the Government Accountability Office concluded that CBP has not adequately developed metrics to determine whether the data it collects from surveillance is helpful. (At the time, CBP agreed with the GAO conclusion and said it planned to develop metrics by January 2019, but so far has not released them.) “I’ve been told that the technologies are not effective, but it’s a little bit like gossip,” says Guadalupe Correa-Cabrera, a political scientist at George Mason University who studies border security. “There’s no official way to assess the effectiveness of the technology. There’s no transparency.”

Though CBP itself doesn’t have a clear system for measuring effectiveness, other sources suggest that the promised surveillance tech was mostly vaporware back in 2006, when then-President George W. Bush ordered the construction of a smart border called Security Border Initiative Network (SBINet). SBINet was supposed to consist of cameras, radar towers, ground sensors, and drones along 2,000 miles of the southern border. (All this data would be monitored at a command center.) Five years and $1 billion later, the never-completed project was killed due to high costs, bad management, and ineffectiveness.

The technology simply wasn’t ready, according to a GAO report on SBINet from 2011. There were about 1,300 flaws caught from March 2008 to July 2009 — with the number of problems happening faster than they were being fixed. The report also identified major defects: workstations that frequently crashed, towers that swayed in bad weather, radars that broke when the radar dish rotated too far, false positives, and “blurry camera images.” 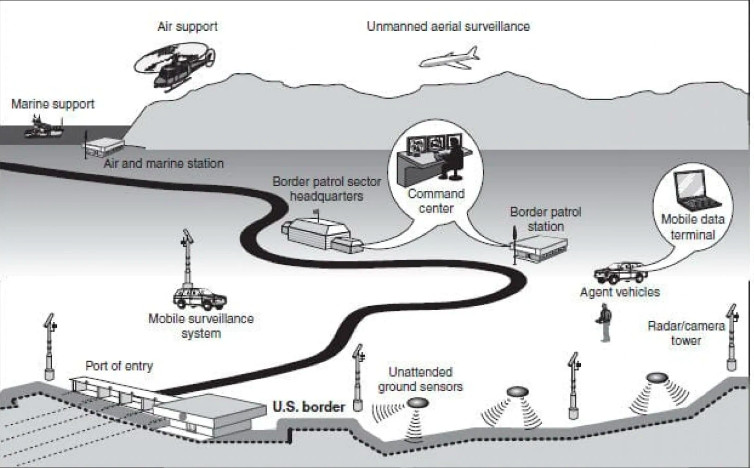 “The old [border] was really good at detecting lost cows and jackrabbits and even in some cases tumbleweed, which isn’t actually that useful,” says James Lewis, a researcher at the Center for Strategic and International Studies. Not only were the cameras not great at telling apart humans and tumbleweed, unattended sensors, like radio and camera towers, were vulnerable to tampering. “People would disable or damage the unattended sensors and it could be something as simple as spray-painting them,” he says. “That was a significant obstacle.” It’s still a problem today.

Environment was another major challenge. Two thousand miles is a lot of territory, and the terrain includes hard-to-reach (and hard-to-see) places in the mountains. “The technology is exposed to not only hostile humans but also animals, birds, and extreme heat,” says Jay Stanley, a policy analyst with the American Civil Liberties Union’s Speech, Privacy, and Technology Project. “One technology that was being looked at is cameras, and you’d need cameras to watch every single point inside an entire mile along the border, and then you’d need to replicate that 2,000 times.”

In fact, for a recent study investigating how surveillance influences migrant routes, the study authors had to take all these failures into account. “We actually adjusted the model to fit not what it was supposed to do, but where it was actually functional,” says Samuel Chambers, a researcher at the University of Arizona. “The range of sites were supposed to be nearly twice of what it really is.” Still, despite technology not living up to all its promises, Chambers and his team found that migrants did try to avoid areas of surveillance — which ended with them taking more dangerous routes and using 10 percent more calories to cross.

So what’s changed in the past decade?

Plenty of startups are still interested in developing border security tech, though it’s unclear which contractors will be building the updated surveillance systems, or what the capabilities will be. Generally, almost everything is cheaper now, cameras are better, and there are fewer environmental failures and fewer shutdowns in heat. “We’ve gotten better at that part because of our happy adventures in the Middle East,” says Lewis. “To some extent, what the border patrol guys are using comes out of military experience, so the technology is better than it was 10 or 12 years ago.”

The software behind the sensors is also better, he says, both in its ability to identify people correctly and its ability to integrate and relay that data. That will be key, since even the most sensitive cameras aren’t useful if the information isn’t being properly interpreted back at command center. “In the future, you’re going to want to automate processing,” he says. “If the software is able to learn, it would reduce the number of false positives and that’s an application for AI.”

Still, Mana Azarmi, policy counsel at the Center for Democracy & Technology, points out that many hyped ideas barely work. One 2015 report from the Department of Homeland Security’s Office of Inspector General concluded that drone surveillance helped in fewer than 2 percent of CBP’s apprehensions at the border, and the accuracy of new facial recognition tools has been challenged, especially for people who aren’t white. “The problem historically, which has carried to today, has been that the CBP has struggled with adequately matching needs with technology that’s available,” she says.

For many experts, underlying all the technological concerns are still questions of civil liberties. People living near the border will have to deal with the impact of the deployment of these technologies every day, even when they aren’t trying to cross a border.

Not every form of technology will have a terrible impact on privacy, says Neema Guliani, ACLU senior legislative counsel. Cargo scanners and tunnel detection technology, for example, might have a minimal impact on privacy and civil liberties, and they raise different questions than drones or facial recognition or biometrics. Still, Guliani argues that CBP has plenty of resources and funding for technology already. “Border enforcement funding at a wholesale level, including for tech, is already at a historic high so there’s not a need for further funding and I think there needs to be a push to defund a lot of the agency,” she says.

Ultimately, it’s difficult to know beforehand how exactly new technology would fare on such an extensive project. “I don’t know what it would take to make it effective, until you go out into the field and you try to install it,” says Stanley, also from ACLU. “There are certain ways in which technology is better than in the Bush years, but it remains an incredibly messy task, with collateral effects on the privacy of people in border communities. And you know, there are many ways that the money could be spent that would improve Americans’ lives much more.”

Or, as Lewis says: “Even these virtual barriers aren’t a substitution for immigration reform.”